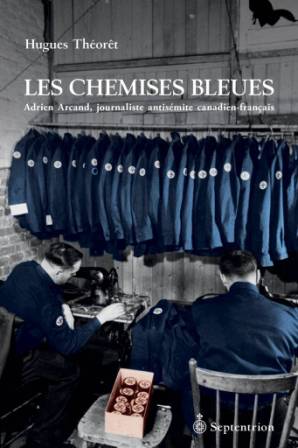 A new book on Canadian journalist Adrien Arcand details his involvement in the rise of Holocaust deniers around the world.

Théorêt’s study, Les chemises bleues : Adrien Arcand, journaliste antisémite canadien-français, has just been awarded the 2014 Canada Prize in the social sciences by the Federation for the Humanities and Social Sciences. Arcand, who lived from 1899 to 1967, was a journalist and politician. The book offers an analysis of his anti-Semitic discourse.

“What’s important about Arcand is not his fascist party,” says Théorêt. “It’s his anti-Semitic talk, and the role he played in spreading anti-Semitism and hate literature in Canada and throughout the world.”

Anti-Semitism rose in Quebec in the 1930s.

Théorêt says it grew out of the Depression and the fact that Jews and French-Canadians occupied the same niches in the economy – unskilled labour, the professions and retailing. That meant the two groups were often in competition.

In 1929 the provincial government tabled a bill to create a Jewish school board in Montreal; that bill, says Théorêt, was the spark that set off a wave of anti-Semitism in Quebec.

Arcand, a journalist, took up the anti-Semitic cause and used his publications to promote The Protocols of the Elders of Zion, a hoax that claimed to expose a Jewish plot to dominate the world.

His anti-Semitism was of the written variety, says Théorêt, and he used publications to defend the idea of a Jewish conspiracy: “Anything bad that happened in Montreal at the time was said to be the fault of the Jews.”

In 1937 Pope Pius XI denounced Nazi paganism. Arcand, who was deeply religious, then abandoned the symbols of fascism. He was interned during the Second World War, and after the war he resumed his anti-Semitic talk in the context of fighting Communism.

Among other things, he began denying that six million Jews had died in Germany during the Second World War, and came to the defence of Adolf Eichmann, a Nazi captured in Argentina in 1960 and executed in Israel in 1962 after a very public trial.

His reputation drew disciples, including Zundel, for whom he was a mentor. “He made me a German,” said Zundel of Arcand.

Théorêt says he interviewed Zundel for the book, and had to work hard to get the interview.

Though he says Arcand heavily influenced Holocaust deniers at the start, Théorêt believes he has very little influence today.

“Quebec is a very tolerant society that has evolved along with its immigrants,” says Théorêt. “Even before the Quiet Revolution of the 1960s, Arcand was out of style.”

END_OF_DOCUMENT_TOKEN_TO_BE_REPLACED

© 2014 Federation for the Humanities and Social Sciences