Good Science Policy Will Require Good Communication and Better Support: A Night Out With CAUT

In what turns out to have been the run up to the unveiling of the federal government’s new Science, Technology, and Innovation Strategy (ST&I), the Canadian Association of University Teachers (CAUT) launched its “Get Science Right” campaign. The goal of the November 27 town hall was to “lay the groundwork for a new direction for science policy” and much of what was discussed was emphatically relevant to the humanities and social sciences community.

Moderated by science journalist Mike De Souza, the evening event took the form of a lively discussion among panelists, including Diane... 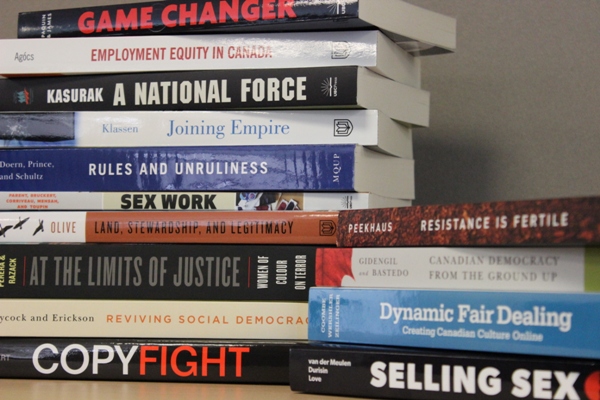 On Monday, The Hill Times published its annual list of “Best 100 Books” from the past year. As usual, books funded by the Federation’s Awards to Scholarly Publications Program (ASPP) were well represented. In fact, 23 of the 100 books – almost a quarter of the list! – were supported by the ASPP.

As you might imagine, we’re absolutely chuffed that so many of the political science books we’ve supported have been recognized by The Hill Times in this way. The Federation sends a hearty “congratulations” to all the authors and publishers of these great books! Here is the list of the ASPP books that made the cut:

Canada and the Universal Declaration of Human Rights

This blog post was contributed for Human Rights Day, observed on December 10.

December 10, 2020 is the 66th anniversary of the Universal Declaration of Human Rights (UDHR).

In his Why Canada Cares (McGill-Queen`s University Press, 2012, pp. 4-5), Andrew Lui shows that Canada`s initial response to the formulation of the UDHR was extremely negative.  Canada was worried the UDHR would give rights to Communists, Jehovah`s Witnesses, Japanese Canadians and Aboriginal Canadians. Canada also opposed economic and social rights. Indeed, Canada actually abstained on...

Executive Override of the Canadian Charter of Rights and Freedoms

By Pearl Eliadis
Pearl Eliadis is a Montreal lawyer. She teaches at the Faculty of Law, McGill University and is a Full Member of the Centre for Human Rights and Legal Pluralism.

This blog post was contributed for Human Rights Day, observed on December 10.

This text is drawn from the introductory pages of Speaking Out on Human Rights: Debating Canada’s Human Rights System (McGill-Queen’s University Press, 2014).

There is a broad consensus in Canada when it comes to human rights. Between 2010 and 2012, Focus Canada surveys showed that more than 70 percent of respondents considered the Canadian Charter of Rights and Freedoms to be an...

When science and social science collide

Scientific research provides much needed innovation for all kinds of activities and industries, like healthcare, insurance and law enforcement to name a few. But scientific research also relies on the work of social scientists like anthropologists, sociologists, and geographers to chart the ethical, social and cultural roadmaps of its recent innovations. Using the example of genomics, Antonia Maioni describes the complex web linking science and the SSH in this poweful Hill Times op-ed.

SSHRC has put out their...

Open Access and the Humanities, by Martin Paul Eve

Nour Aoude, Federation for the Humanities and Social Sciences

When it comes to open access, it can sometimes feel like the humanities and social sciences are merely catching up to the progress made in science, technology and engineering disciplines. One of our goals at the Federation is to encourage the publishing of SSH monographs in open access. So naturally, we are very excited about the recent publication of Open Access and the Humanities: Contexts, Controversies and the Future (Cambridge University Press) by author...