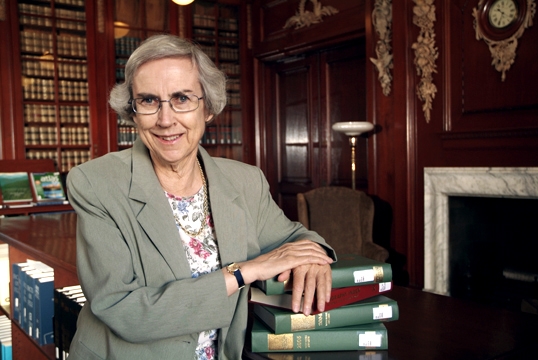 This week will be Patricia Roy’s 46th year attending the Congress of the Humanities and Social Sciences. Her speech at our media kick-off event on Friday – which included remarks from UVic president David Turpin, Federation president Antonia Maioni, Academic Convenor Andrew Rippin, and Congress Chair Catherine Mateer – offers a wonderful glimpse into the opportunities and excitement surrounding Congress that have continued to grow over the years:

I hasten to point out that I was a fairly young student when I attended my first Congress, or as it was then known, the Learneds. I have attended almost every year since. In 1965, the meetings were much smaller. To cite an example, the Canadian Historical Association, one of the larger groups at the Congress, then only had two or three simultaneous sessions. This year, there are as many as nine.

Why do I keep coming? There is intellectual satisfaction in learning about the latest research in one’s own field or a related one, or in engaging in inter-disciplinary sessions. This year, for example, as part of the committee organizing the program for the Canadian Catholic Historical Association, I helped plan a joint session with the Canadian Theological Association. Although both groups study religion, the historians and theologians will be approaching the same subject, in this case the 50th Anniversary of Vatican II, in different ways.

Secondly, the Book Fair or Expo, is an opportunity to see the latest publications in one’s field and to discuss current research projects with editors and possible publishers.

Thirdly, the generations cross. The first time I attended I was somewhat awestruck to see name tags that matched the names of the authors of the books and articles I had read. I discovered that they were real people and friendly too! Now that I’m part of the old crowd, students sometimes come up to me to say: “I had to read one of your articles once for a course.” However, I never know whether to take that as a compliment or a complaint.

Fourthly, the Congress provides an opportunity to meet old friends and colleagues from across the country not only in formal meetings but also in a social setting over coffee or in the Sips Tent. And, of course, one also makes new friends and develops networks.

Fifthly, because the Congress moves about, it is a chance to see Canada. Over the years, I have attended conferences in every province and my teaching has benefitted. For example, after a conference in Halifax, I took a holiday trip to Cape Breton. When I next taught the introductory course in Canadian history I could give students a much better explanation of the importance of Louisbourg than I could ever gain from reading books or looking at pictures. I hope that our visitors from beyond the Rockies will leave with a better understanding of this part of the world.

Seeing the whole: innovation in learning

On National Aboriginal Day, what does reconciliation mean to you?