Nour Aoude, Federation for the Humanities and Social Sciences 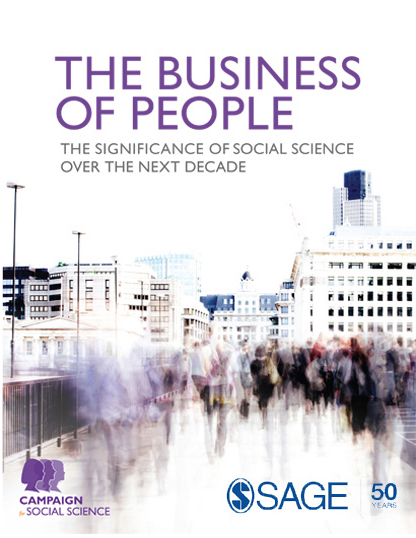 Released by the UK’s Campaign for Social Science  on February 24, 2015, “The Business of People” report underscores the critical role that social science research should play in the that country’s science and innovation strategy. The report’s release comes two months after the UK government’s December 2014 announcement of its science and innovation policy. While the policy clarifies that “science” is used to encompass “the natural, physical and social sciences, engineering, technology, the arts and humanities”, there is still debate as to whether this will translate into a fair share of funding for the social sciences.

A key determiner in this regard is said to be the results of the UK government’s 2014 Research Excellence Framework (REF), a national research quality and impact assessment system developed by the research funding councils of England, Scotland, Wales and Northern Ireland.

“The Business of People” was therefore a timely arrival, calling for additional funding for interdisciplinary research and a more explicit recognition of the social sciences in any future iterations of the government’s science and innovation strategy. The report also calls for changes to future research excellence exercises to allow for greater recognition of the results of interdisciplinary research methods.

The report is a refreshing portrayal of the social sciences, placing them at the heart of research methods and interpretive frameworks for measuring and conceptualizing the forces that affect people and society. As noted by James Wilsdon, chair of the Campaign for Social Science and David Walker, head of policy for the Academy of Social Sciences in The Guardian, no “strategy for science and innovation worth the name” would overlook the business of studying and understanding people.

The Campaign for Social Science was established in 2011 by the Academy of Social Sciences, whose members (comprising learned societies, academics and practitioners) represent nearly 90,000 social scientists. The goal of the Campaign was to “celebrate the success of UK social science, at a time of change and uncertainty in the higher education system.”

In Canada we have similarly had a new policy framework for science and innovation announced by the Government in December 2014 alongside the announcement of the Canada First Research Excellence Fund.  “The Business of People” is an excellent resource that can inform how the social sciences and humanities community in Canada feeds into and shapes responses to these new policy and program developments in our own country – including how to put people at the centre of the discussion on science and innovation. Congress 2015 attendees will have a firsthand opportunity to hear from James Wilsdon (alongside speakers from US and Canada) at a public panel sponsored by the Federation and SAGE publications on June 3.

Read the full “The Business of People” report here.